The Air Fuel Ratio (AFR) is controlled by how much fuel is delivered to the cylinder for combustion. There are many factors and many sensors that come into play when trying to determine how much O2 is in the cylinder. rusEFI collects this information and makes a guess about how much O2 is in the cyl, then rusEFI has to determine how much fuel is needed to get the expected AFR and deliver that fuel charge. Below is a graphic that shows some common differences in AFR for a particular Toyota engine. Other engines are similar to this, but may have a different peak power area, or peak efficiency area, etc. To know this information for your particular setup you would need to run it on a Dyno, and determine the exact AFR's.

Most people who are installing tune-able ECU's like rusEFI are looking for more power at the track. However your fuel weight advantage is also commonly important. So it is common that an engine will be tuned for peak power when over a certain load, and peak economy when at a cruise load. OEM's are often concerned with minimal environmental impact, so they may tune to a different AFR. Once you have decided on what your AFR strategy is going to be, you'll have to tune rusEFI to deliver that strategy. As well you will probably use a wide band oxygen sensor to measure your AFR and ensure that you are meeting your desired AFR target.

Wideband Oxygen Sensor is pretty much a requirement for both manual and auto-tuning.

rusEFI could be used with MAF sensors sending out voltage (like Mazda Miata) or current (like Ford Aspire).

Here are examples of some relevant commands:

where TPS is the reading at the start of engine cycle

where MAF is the reading at the start of engine cycle

Fuel map auto-tune is a process of automatically preparing the configuration table based on the information gathered while vehicle is being operated. At the moment we rely on EFI Analytics Tuner Studio for fuel map (MAF mode) or VE map (Speed Density mode).

Last but not least closed-loop fuel correction dynamically corrects fuel to match target AFR. The better your maps are, the better your actual AFR would be as is. Closed-loop correction is the tool to fix the gap between your maps, our models and reality. 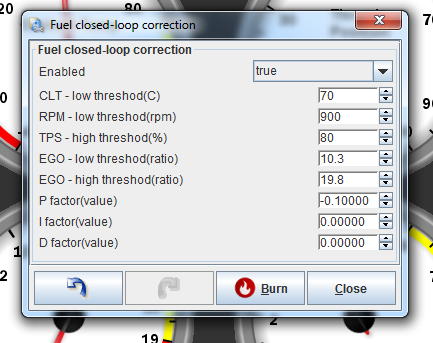 Why Do We Need It?

(This only applies to gasoline engines; other fuels may react differently)

In order for the engine to run, the cylinders must be supplied with a combustible mixture of air and fuel. Under static or quasi-static conditions, the basic fuel algorithms take care of that. But under dynamic conditions in the intake area, especially with a quick change in throttle position things are different. Fuel enters the cylinder as a mix of evaporated fuel and droplets on most injected engines. How much evaporated fuel the air can hold depends on several factors, but most importantly on temperature of the air and pressure.

Pressing down on the gas pedal increases the pressure in the intake manifold which has the effect that it can't hold as much evaporated fuel anymore. As a result, some of the fuel contained in the air deposits on the intake runner walls. This is especially true coming off a strong vacuum such as idle or slow cruise/coast. Now this fuel is not available for combustion, creating a lean condition. This has to be corrected for and that's what acceleration enrichment is mostly about. There are plenty of other effects going on, such as the “puddle of fuel” that is explained under the wall-wetting theory. The main point is: When the pressure in the intake increases rapidly, we create a temporary lean condition.

Of course the opposite is true as well: When lifting off the gas pedal, suddenly the pressure in the intake drops and the air can hold more fuel vapor which it will suck off the intake walls. This creates a temporary rich condition. This usually isn't harmful to how the engine is running, but it's detrimental to fuel efficiency and the environment.

The obvious way to deal with the effects is to adjust the amount of fuel injected based on the increase or decrease in pressure in the intake. When using the speed-density algorithm for fueling, this is fairly easy, as we have the pressure right from the MAP sensor. So basically you take a multiplier to the fuel you would ordinarily inject and base it on the delta in pressure. Small delta means small multiplier and big delta means big multiplier. 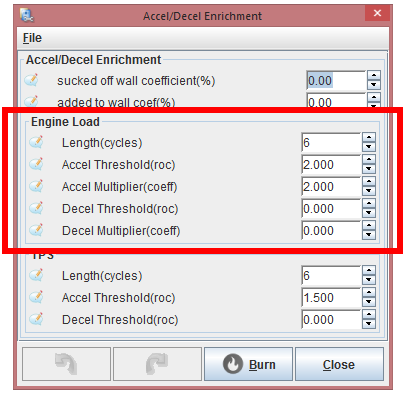 The Length(cycles) specifies how many previous ignition events will be considered by the enrichment. This should probably be at least the number of cylinders in the engine.

Note: This parameter may not be needed anymore, there seems to be overlap with the taper-curve. Once the curve tapers to '0' we're done with this enrichment cycle.

The Accel Multipier(coeff) determines how much additional fuel is given. The current firmware (status Nov. 5th 2016 and earlier) calculates a virtual increase in MAP/ Engine Load, based on this factor. It then looks up the VE value in the fueling table based on this value. This will be replaced in future versions by just multiplying the amount of fuel injected and not changing the looked-up VE value.

Decel Threshold(roc) and Decel Multiplier(coeff) are the same as the corresponding parameters, but for deceleration enleanment calculation.

After an increase in MAP there is an immediate need for more fuel. So at least until all cylinders fired once we need to add fuel. But even after that, things usually haven’t quieted down completely, so for the next events we still need a little more additional fuel and so on. That’s where the taper multiplier comes in. 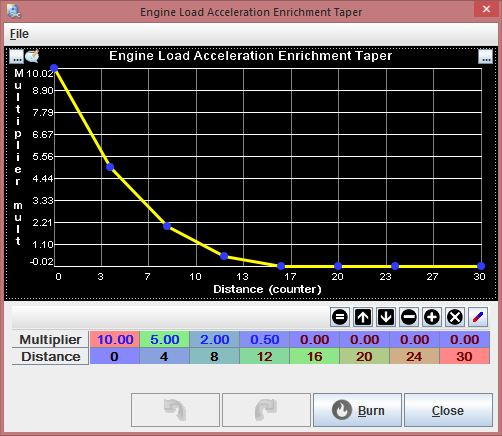 Other corrective factors may be needed in future. For example, at high air-velocities in the intake, meaning high rpm, the effects are not as pronounced, so less enrichment may be needed based on rpm. Load based enrichment has a few disadvantages. One major disadvantage is that it is just a hair slow. Especially with small throttle movements at high vacuum, the reaction of load based enrichment is not fast enough and can’t easily be tuned fine enough. For this we use a different strategy.

TPS-movement can be used as a predictor of change in MAP. This is equivalent to the accelerator pump on carbureted engines. A slow push on the pedal (small delta) causes very little or no enrichment (dumped fuel), whereas a hefty stomp on the pedal and rapid movement result in a big additional shot of fuel.

The advantage of TPS based enrichment is that it reacts very quickly and can react to small amounts of change at or near closed throttle. The disadvantage is that it can’t react to changes in MAP that are not caused by a change in throttle position, like a turbo-charger spooling up. Usually a mix of load-based and TPS-based enrichment is employed.

The parameters for TPS-based enrichment have the same meaning as the Engine-Load based parameters. However, there is no multiplier- this is taken care of in a separate table. 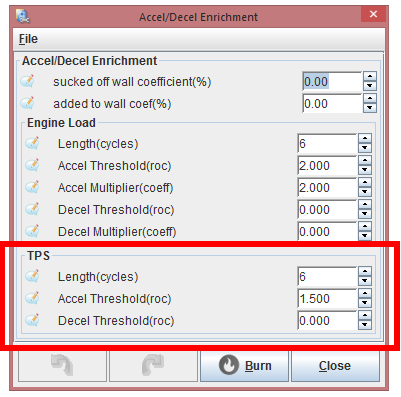 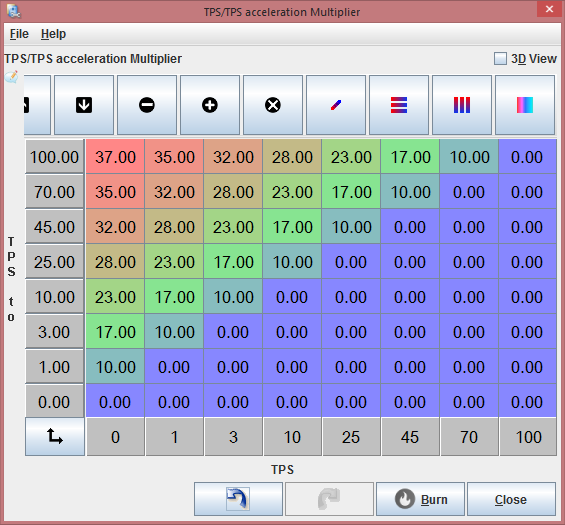 Why so complicated? A throttle-body is not a linear device. Cracking it slightly open from completely closed will cause much more of an increase in MAP than opening it the last percent from 99% to 100%. This table allows to adjust for this degressive behavior.

In future more adjustments may be needed- for example at low rpms a throttle that is just 10% open may essentially be considered fully open, since it does not cause a significant restriction to the low airflow, so opening the throttle from 10% to 100% may have only a negligible effect on MAP. But at high rpms there will still be a significant change in MAP, Even when the position changes from 90% to 100%. A calibration table for this behavior may be required in order to be able to tune enrichment perfectly.

Should the fuel from the current change and the previous taper be added up? Or averaged? Or should the latest change completely override the previous change?

The point of enrichment tuning is to keep the engine from bogging down when stepping on the throttle. While it would be great to maintain perfect AFRs while this is happening, that goal is currently not realistic. OEM ECUs don’t get it perfect either.

A gasoline engine will run without noticeable bogging at AFRs between 9 and 16, maybe 17 or so. So we’re shooting to stay within a very wide corridor.

Either way seems to work eventually. Lots of trial and error will be needed to get this just right.